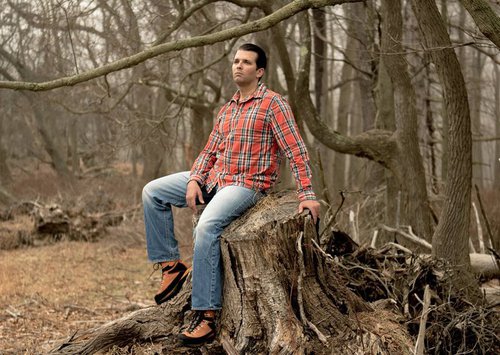 Donald John Trump Jr. (born December 31, 1977) is an American businessman and former reality television personality. He is the eldest child of President Donald Trump and his first wife Ivana Trump.

A fourth generation businessman (following his great-grandmother Elizabeth, grandfather Fred, and father), Trump Jr. currently serves as a trustee and executive vice president of the Trump Organization, running the company alongside his younger brother Eric.[2] He also served as a boardroom judge on his father's TV show The Apprentice.

Trump has also been active politically, serving in his father's presidential campaign. He had a meeting with a Russian lawyer, who promised damaging information about the campaign of Hillary Clinton in the 2016 presidential election.[3][4][5] He is known for frequently promoting conspiracy theories and false information.[6][7][8]

Following his success in campaigning for Republicans in the 2018 midterm elections, Don Jr. is regarded as having a potential future as a politician.[9][10]

As of May 2019, Trump Jr. is under investigation by the United States attorney for the District of Columbia, with Ivanka and Eric Trump, for their role in their father's inauguration.[11]

He is also under investigation, along with Allen Weisselberg, for a possible role in concealing hush money payments and signed checks reimbursing per Michael Cohen regarding his father and the Trump Organization, by the Southern District of New York.[11]